Saturday morning of Passover, Easter weekend of 2018, Geraldo Rivera on Fox and Friends spewed the most anti-Semitic, vile lies about Israel I have heard to date. This so-called ‘legendary journalist” called Gaza a “concentration camp,” and claimed on air the same lies promoted by the worldwide anti-Israel BDS movement. It is the worst anti-Semitic rhetoric. And it was in my living room on Passover!

In response to the news story that Gazans were rioting near the security fence with Israel,

“We have to recognize that this violence is something that could happen every day in Gaza. There are 2 million Palestinians, they are stuffed into an area that is twenty-five miles long by five miles wide. The Israelis control the water the electricity, jobs,.”

The co-host of weekend Fox and friends Pete Hegseth, also a decorated war veteran, jumped in and defended Israel, and the truth, by saying

“Wait a minute. The keepers of the ‘concentration camp’ are Hamas, not Israel. And Hamas has turned it into a terrorist strip.”

Geraldo came back “who controls the fences though?”

Pete tried to get the truth in the conversation;

“that’s because the rockets are being fired on Israel, to call it a concentration camp is really, really slanted..”

Geraldo –“What is slanted is to say that Israel is being afflicted or attacked by militants in Gaza without recognizing that there are 2 million Palestinians in Gaza with no hope, they have no future, their lives are being controlled since the 1967 war, and the President must re-energize the peace process.” 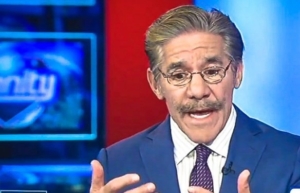 The facts are that Hamas, the elected ruling party of Gaza, is a designated terrorist group funded by Iran that has been condemned by the U.S. Congress for using its citizens as human shields. In the past Hamas militants shot rockets at Israel, hiding the rockets in hospitals and schools to ensure that if Israel retaliated innocent citizens would be killed. They would then film this, publicize it for the world media to condemn Israel.

The U.S. House of Representatives passed the Hamas Human Shield Protection Act in a unanimous bi-partisan vote of 415-0 on February 14th, 2018. It is now in the foreign relations committee of the U.S. Senate.

Hamas is doing it again. They are using their citizens as human shields today. They have have sent their citizens to riot at the security border with Israel and throw stones at the Israeli soldiers.

Media reports over a dozen Palestinians have been killed by the return fire from Israel.

Many Gazans armed for terror attacks have snuck across the border in the last few days leading up to the riots. Now the rioting crowds are attempting to weaken the Israeli security forces. Primarily they are there to get media attention. They will attack Israel on the world stage of propaganda. They are also protesting the United States opening the Embassy in Jerusalem in May.

The propaganda game is working as the U.N. Security Council has called for an emergency meeting. The U.N. is notoriously famous of attacking Israel when Israel has had to defend agasitn terrorism.

To calm down the heated argument, the hosts of Fox and Friends agreed that the ‘debate’ should be left for another time. That this was “similar to family debates around the kitchen table.”

The problem is that this isn’t about debating opinions. This is about historical facts. There is truth and there is a created lie.

Geraldo Rivera has been brainwashed by far left anti-Semitic anti-Israel rhetoric which has no resemblance to the truth. He is using his platform of trying to sell his book to put these lies out over the airwaves.

IT IS ANTI-SEMITIC AT ITS CORE 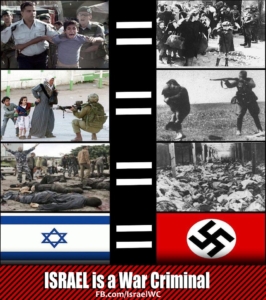 This propaganda is generated by the anti-Israel Boycott Divest and Sanctions (BDS) movement that is attempting to cripplie Israel financially and politically. It is history trying to repeat itself as the Jews were crippled financially throughout Europe before the Holocaust based on lies and false propaganda just like this.

In 2015, after a barrage of attacks on Israel, the Palestinians went to the United Nations and attempted to file war crimes against Israel.

Gaza is NOT “Occupied Territory.”

In 2005, in a “Land for Peace” deal, Israel GAVE Palestinians 100% control of the Gaza strip.  Israel forcibly made every Jewish family leave their homes in Gaza, literally pulling them out of their generational home against their will. Neighbors that lived side by side for generations were separated and scattered to far ends of Israel, destroying their lives. They did this to their own Jewish people in order to give Palestinians a strip of land they could call their own and completely govern themselves. Israel did this to try to get peace.

The over 80 car bombs, bus bombs and others were finally stopped by a security border between Gaza and Israel.

The Palestinians in Gaza were now self governed. In 2006 they elected the terrorist organization Hamas as thier governing body, rather than the Palestinian Authority which governs the West Bank.

Israel left an infrastructure of buildings and greenhouses in Gaza to give the Palestinian people a start at building a viable food source, infrastructure  and workable environment for their community. Gaza could have been, should have, been developed into a thriving resort by the sea.

Instead, the Palestinians of Gaza elected a terrorist group to be their government. They then proceeded to send thousands of rockets and terrorists into Israel. They forced Israel to build a security fence to stop the unbridled terrorism.

By giving the land and giving the Palestinians a chance to build a peaceful society side by side with Israel, Israel got in return a terrorist neighborhood bent on bombing and killing them. Each time the terrorism got stronger and Israel had to retaliate to protect her citizens, the United Nations and the anti-Israel forces screamed “look at Israel, they are killing the Palestinians.”

Millions of dollars of humanitarian aid from Israel and around the world goes in to Gaza to help them build homes and infrastructure. Hamas has used it to build terror tunnels. These are tunnels under the ground into Israel where terrorist can sneak through and kidnap Israel security guards and kill innocent citizens.

In 2001 there were 40 bombings in Israel, Killing 63 and injuring hundreds more. Hamas claimed responsibility for most of them. These bombings were stopped by the building of the security fence and border in 2005.

The lie is made truth and the truth is made a lie, just as scripture tells us.

For Geraldo Rivera to call the Gaza strip a concentration camp for the Palestinians is the most horrific analogy I can imagine.

Israel passed a ban on BDS supporters entering Israel in March of 2017. Geraldo Rivera needs to be added to that list and be banned from entering Israel.

As he goes on his book tour, his book should be boycotted by any friend of Israel.