America and Israel have been aligned from the beginning. July 4, 1776, the birth of America, fell on a significant day, the 17th of Tammuz on the Hebraic calendar, known as Shiva Asar b’Tammuz.  By seeing God’s timing, we see the alignment, prophetic destiny of America and Israel coming into full light.

17th of Tammuz marks five significant events in Jewish and Israel history, taking place hundreds of years apart but all recognized on the same calendar day. It is a recognized Jewish day of mourning.

So why would God align America’s birth with this significant day on the Hebraic calendar?

All the events were concerning the breaching of the borders and the breaking of the law.

America was founded on God’s Law.

The Declaration of Independence signed on July 4th, 1776, declares the importance of God’s Laws in its text, and rights endowed to men by the Creator are above any laws made by man.

We hold these truths to be self-evident, that all men are created equal, that they are endowed by their Creator with certain unalienable Rights, that among these are Life, Liberty and the pursuit of Happiness. 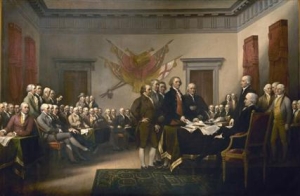 The U.S. Ambassador to Israel David Friedman spoke to this at a historical celebration of the 243rd anniversary of the signing of the Declaration of Independence on July 2nd, 2019, at the new American Embassy in Jerusalem. (As reported by IsraelUnwired and other sources)

“Many believe – and certainly our founding fathers believed – that the word of our creator is expressed in the Bible, and, as recognized by the prophet Isaiah, that word emerged from the city of Jerusalem. As Isaiah said, “out of Zion shall go forth the law and the word of the Lord from Jerusalem.”

“To understand this connection between the birth of our nation and the City of Jerusalem is to understand all that has transpired since between Israel and the United States.”

“It is to understand why the Pilgrims risked their lives in the 17th century to reach a new world and establish what many of them referred to as a “new Jerusalem.”

Ambassador Friedman then continued to lay out America’s ties to Israel over history.

As Israel’s strongest ally, America is sanctioned to guard Israel against future attacks of her borders and the safekeeping of Jerusalem.

Watching the alignment of the dates shows us the significance. The last time the Hebrew calendar dates of 17th of Tammuz and July 4th aligned was July 4, 2015, and July 4, 1996.

In Westwood, Los Angeles California, a group of Latinos attacked American flag carrying “Voices for America” volunteers who were having a nearby rally. The Latinos waved “Amnesty” signs as they tore American flags from their hands and stomped on them. No police were in sight as the demonstrators clashed in violence.

This is eerily similar to Shiva Asar b’Tammuz which fell on July 1, 2018. The day before massive protests were staged across America concerning border security and immigration laws.

The immigration and border issue has never been resolved. Instead, it has significantly worsened and caused great division across the land.

Both the borders and the law remain at the forefront.

America continues to be the strongest friend and partner in military assistance and security for Israel’s borders.

Protecting the Borders from the Air

The Iron Dome today is saving lives by shooting Hamas rockets from the sky, and Iranian rockets from Syria. It was appropriated by Congress, agreed to by both sides. PM Netanyahu has publicly thanked America for the Iron Dome and credited the United States for the countless lives it has saved.

Each year since its development, the US has helped fund and build the Iron Dome missile defense system that protects Israel’s borders.

American is also using this defense technology from Israel in her own missile defense systems.

According to the American Israel Public Affairs Committee, the NDAA authorizes $500 million for U.S.-Israel missile defense programs. This funding is critical to protecting and saving lives amid the constant threat of rockets from Iran-backed terrorist groups in Gaza, Lebanon, and Syria.

Protecting the Borders from Below

Other important elements of NDAA include joint efforts to strengthen U.S.-Israel cooperation on tunnel detection technology.

The U.S. – Israel partnership in tunnel detection has found massive tunnels used for drug smuggling. There is a great threat of terrorism passing across the southern border of America as Iran’s terror arm Hezbollah has created strongholds in South America.

A half-mile tunnel equipped with ventilation, rails, and electricity was found in 2016 under San Diego and Tijuana. It is believed that Hezbollah assisted the Mexican drug cartels in its design and construction.

It is very similar to the tunnel Israel found at the Lebanon border in 2019, built by Hezbollah to conduct terror attacks. The discovery of the tunnel into Israel, which was 6/10 mile long and 22 stories underground dug through stone, was found via a U.S. – Israel joint mission.

Iran has partnered with Mexican drug cartels to assist with tunnel building into the United States and drug smuggling.

Since 2005, Iran and Hezbollah have developed a presence in Latin America, opening 17 cultural centers, and forming relations with the Mexican drug cartels. 200,000 immigrants from Lebanon and Syria, many of whom are illegal residents, live in Mexico, and have established residence with the help of drug cartels like Los Zetas, the most technically advanced of Mexico’s drug cartels.

Illegal Immigration into America surged 233% in April of 2018.

This is a direct attack on American’s rule of law as well as the security of the nation’s borders.

Israel’s border security is in critical danger. Her cities and people, even the Temple Mount, are terrorized by the same spirit that has tried to annihilate God’s people for thousands of years.

Iran has established army battalions and military bases in Syria on the eastern border. Iran funded terrorist army Hezbollah to the north is armed with over 150,000 missiles pointed at Israel preparing for war. Rockets, firebombs, and terrorism continue from the west from Hamas in Gaza.

America is having the border breached by an estimated 5,000 illegal immigrants a day, overwhelming the Border Patrol, while far-left political factions protest against immigration control and call for an end to border protection.

This is happening while Hezbollah, Iran’s terror arm, has established a stronghold in Venezuela and Mexico and helping the cartels to build tunnels.

A Hezbollah self describer ‘sleeper cell,’ Ali Kourani, was convicted in New York in May 2019.

This was ignored by the U.S. media.

Foreign Policy reported Ali Kourani was convicted on terrorism charges related to his surveillance of FBI and U.S. Secret Service offices, as well as a U.S. Army armory, all in New York City. A high-level Hezbollah operative, he was also identifying Israelis in New York who could be targeted by Hezbollah and finding people from whom he could procure arms that Hezbollah could stockpile in the area.

“While living in the United States, Kourani served as an operative of Hezbollah in order to help the foreign terrorist organization prepare for potential future attacks against the United States,” said U.S. Assistant Attorney General for National Security John Demers.

The far left political movement promotes financial divestment and boycotts against Israel with false propaganda, just as they protest against American laws and border protection with false rhetoric. This far left movement and even some Democrat Political Candidates for 2020 are calling for an end to American border security.

It is the same enemy; an anti-law, anti-God, anti-Israel spirit and movement conducting a political attack on both fronts.

We must pray for the sanctity of the Borders and Laws for the United States and Israel, especially as we enter the mourning period set by the Lord’s calendar.

America will continue to help keep Israel safe, just as the strategic partnership between the two nations grows.

The Talmud says that after the future redemption of Israel and the rebuilding of the Temple, these four fast days, of which the 17th of Tammuz is first, will be re-dedicated as days of rejoicing and festivity.

Zechariah says: the 17th of Tammuz will become a day of “joy to the House of Judah, and gladness and cheerful feasts.”

America and Israel are aligned for such a time as this.