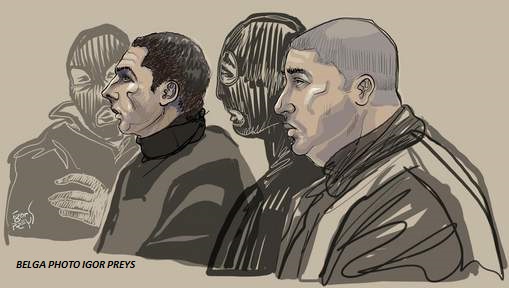 An Arab French national, Mehdi Nemmouche, went to Syria to join Islamic militants. After he was allowed to return to France, he shot two four dead in a horrific anti-Semitic terror attack at the Jewish Museum of Belgium. His lawyers say it’s Israel’s fault.

Nemmouche was caught in the French city of Marseille during a random bag search. He was found to be in possession of weapons that match the ones used at the museum.

The Jerusalem Post reports that during the high-profile trial, two French journalists testified they remembered Nemmouche as a profoundly anti-Semitic and full of hatred.

The 2014 Belgium shooting killed an Israeli tourist couple, Myriam and Emmanuel Riva, Also killed were two employees of the museum, Dominique Sabrier of France and Alexandre Strens of Belgium.

The Lawyers Turned it into an Anti-Israel Conspiracy

Mr. and Mrs. Riva were Israeli tourists on vacation in Belgium. Nemmouche’s defense team promoted a conspiracy theory during the trial claiming they were Israeli spies, Mossad agents.

“It is regrettable that this trial was replete with unbelievable conspiracy theories and demonization of Israel on the part of certain attorneys and the suspect, and we can only hope that the judges have recognized the very dangerous nature of allowing these tropes to enter a court of law.”

The families of victims and survivors of the attacks voiced relief at the end of a two-month-long jury trial fueled by controversy. They denounced the conspiracy theories put forward by Nemmouche’s defense lawyers.

The attack in May 2014 – the first by a Western European who fought with Islamist militant factions in Syria’s civil war – highlights the threat posed by jihadist returning home.

The many attacks against the Jewish community in France, Belgium and the entire European Union is indicative of the rise of anti-Semitism and the ability of would-be terrorist to roam between nations.

In the Church4Israel article “75 dead and over 100 Wounded as Terror Again Hits France, Did They See This Coming?” it was explained how the rise of anti-Israel propoganda, an influx of immigrants from Syria and the resulting anti-Semitism had lead to Jews fleeing France and Europe by the thousands. 82% of the Jews fleeing Europe came from France.

Between December 2007 and December 2012, Nemmouche spent five years in custody. France 24 reports that in prison, he was known as an “extremist proselytiser” who tried to organize group prayer and spoke of jihad and the 1995 “genocide of Muslims in Bosnia”. This linked him to the “Roubaix gang” — French Islamists who returned from the Bosnian war and carried out robberies to fund Al-Qaeda, some of whom he knew.

Nemmouche is also facing charges later in France over his role as the jailer of four French journalists taken hostage by jihadists in Aleppo in 2013.