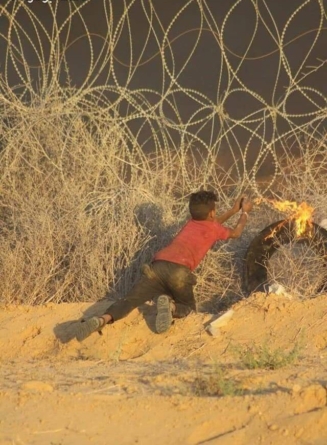 Gaza, a strip of land on the beautiful Mediterranean was once considered southern Israel. It is now Palestinian Arab controlled and run by a designated terrorist organization. Arab children as young as five years old trained in terror.  They are taught their life goal is to “kill the Jews.”

In this article, I will share with you the history of how we got to this point and the dangers Israel faces today.

Thanks to “Israel Unwired” for the below video.

A Year of Terror

Since 2018 the governing body of the Gaza strip, Hamas, has directed it’s citizens to riot at the Israel border fence. Tires are burned to create a thick black smokescreen. The smoke ensures the Israeli army can not see who is throwing bombs at them, or at whom they are returning fire.

Thousands of Gaza citizens are sent to to the Israel border to riot. The Hamas terrorists throw stones and explosives at Israeli soldiers on the other side.

The masses try to breach the border fence. When Israel responds to prevent the breaking the barrier or forced to fire as grenades and explosives hurled at them, citizens can be wounded or killed.

This week, the sixth Gaza citizen killed amid the riots was a 13-year-old boy.

Unfortunately, allowing women and children harmed in the riots is a goal of Hamas. They know the world will attack Israel politically if Hamas can get children to be the casualty.

The world media and the UN will condemn Israel for the killing of a child. The anti-Israel UN will not look at the truth. They will not recognize that Hamas purposefully sends children out to attack the Israel Defense Forces with the expectation that a child may die. Hamas knows that this will bring vilification upon Israel.

Women and children used as human shields is a war crime, yet Hamas is not held accountable on the world stage.

On December 21, 2018, the “Sanctioning the Use of Civilians as Defenseless Shields Act” became law. It recognizes the terror organizations Hamas and Hezbollah use of civilians for human shields and imposes sanctions on any member of the groups including not allowing them to enter the United States.

The Truth About Gaza

In 2001 there were 40 bombings in Israel, killing 63 and injuring hundreds more. Hamas, based in the Gaza Strip, claimed responsibility for most of them.

The over 80 car bombs, bus bombs were finally stopped by a security border between Gaza and Israel.  Israel completely withdrew every Jewish family and resident from the area. The Palestinians were given the land.

Israel withdrew from Gaza, only to have terror continue –

Israel forcibly removed every Jewish family from their homes in Gaza, literally pulling them out of their generational homes against their will.

Neighbors that lived side by side for generations were separated and scattered to far ends of Israel, destroying their lives. The Israeli government did this to their Jewish people to give Palestinians a strip of land they could call their own. The Palestinians could now govern themselves. Israel did this to try to get peace.

The Palestinians in Gaza were now self-governed. In 2006 they elected the terrorist organization Hamas as their governing body, rather than the Palestinian Authority which governs Judea and Samaria, also known as the “West Bank.”

Israel left an infrastructure of buildings and greenhouses in Gaza to give the Palestinian people a start at building a viable food source and productive environment for their community. Gaza could have been, should have been, developed into a thriving resort by the sea.

Instead, the Palestinians of Gaza elected a terrorist organization bent on eliminating Israel as their leaders. They then proceeded to send thousands of rockets and terrorists into Israel. They forced Israel to build a security fence to stop unbridled terrorism.

By giving the land, giving the Palestinians a chance to build a peaceful society side by side with Israel, Israel got in return a terrorist neighborhood bent on bombing and killing them.

When the terrorism got stronger, Israel had to retaliate to protect her citizens. The United Nations and the anti-Israel forces screamed: “look at Israel, they are killing the Palestinians.”

The below map shows Gaza today in the Southwest corner of Isreal, alongside the Mediterranean Sea, also bordering Egypt. The ranges of rockets currently located in Gaza, operated by Hamas displays the danger Israel faces. 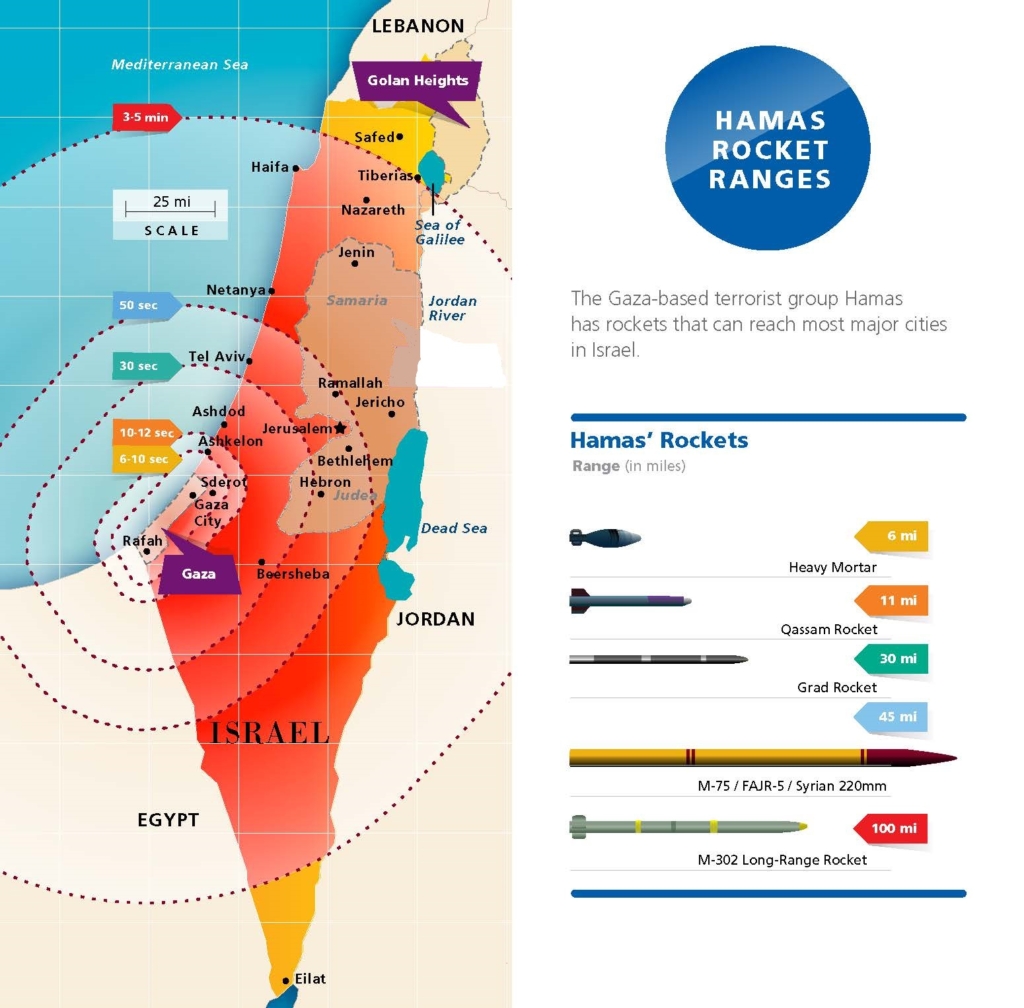