Israel law bans two U.S. Congresswomen, Reps Omar, and Tlaib, from entering the Jewish state. In 2012 then-President Obama denied a member of the Israeli Knesset entry into the U.S. This is not unprecedented.

Reps. Ilhan Omar and Rashida Tlaib have been denied entry under Israeli law. An exception was considered for them as they are members of the U.S. Congress. However the day before their departure, Israeli officials announced they would NOT be welcome, and visas will not be issued.

Every nation has a right to deny a visa to any foreigner – even an elected official, especially if they are promoting terrorism or working against the host nation.

[Update – BREAKING NEWS 7:00 am August 16, 2019 – The Israel Foreign Minister had said in an earlier statement that the Congresswomen could request entry on humanitarian grounds. Rep. Talib did it the right way and was granted a visa. Rep. Rashida Tlaib separately and personally wrote to the Israeli Foreign Minister and made a plea to enter Israel on humanitarian grounds. Rep. Tlaib wrote; “I would like to request admittance to Israel in order to visit my relatives, and specifically my grandmother, who is in her 90’s and lives in Beit Ur al-Fouqa. This could be my last opportunity to see her. I will respect any restrictions and will not promote boycotts against Israel during my visit.”  Israel granted her request and will let her come to visit her family that lives in the West Bank. Hours later Representative Talib announced on Twitter that she will NOT go to Israel and called them “racist and oppressive.”]

Obama Did the Same. It is not unprecedented.

In 2012 then-President Barrack Obama refused entry to the United States of a sitting member of the Israeli Knesset, which is Israel’s Parliament.

The then Israel elected official, MK Ben Ari, was known to be a former member of a far-right political group called Kach. Kach is an anti-Arab group that believes Arabs (Palestinians) should be removed from all Israel, including the West Bank. Ben Ari never disavowed his connection with the group but was an elected member of Israel Knesset. The Obama administration refused to let him into America.

Similarly, Reps. Omar and Tlaib are denied entry. They are vocal supporters of the Boycott, Divest and Sanction (BDS) movement against Israel. The aim is to delegitimize Israel and cause political and economic harm to not only Jewish companies but any company who does business with Israel.

The founders of the BDS movement believe Israel should not exists at all. It is grounded in anti-Semitism.

Denying Entry to BDS Supporters, Enemies of Israel is Law

Amendment No. 28 to the “Entry Into Israel Law” was passed by the Israel Knesset (Isreal’s Parliament) in March 2017. It prohibits entry into Israel of any foreigner who makes a “public call for boycotting Israel” or “any area under its control.”

Israel is not making an exception for U.S. Congresswomen. They have openly supported the Boycott, Divest and Sanction (BDS) movement that sets out cause economic harm and delegitimizes Israel.

Supporters of the “Entry Law” defend it as within Israel’s rights to control its borders. It is a counter-measure against the opponents to Israel that call for an end to the Jewish State.

Foreign Minister Israel Katz said that he supports the ban of the Congresswomen “due to their blatant support for the boycott of the State of Israel, terrorism against Israel and minimizing the Holocaust.”

Rep Omar proved her loyalty to the BDS movement by introducing a pro-BDS Resolution in Congress. It was introduced by her to counter the strong stand the rest of Congress took supporting Israel against the BDS movement.  In overwhelming bi-partisanship, the House of Representatives passed an anti-BDS Resolution with 398 co-sponsors and an overwhelmingly positive voice vote. Days later Rep Ilhan Omar introduce a pro-BDS Resolution that only got seven co-sponsors and will never get through a committee. It is dead on arrival. She and her crew are on the wrong side of history, and the wrong side of the facts.

Majority leader Steny Hoyer told The Jerusalem Post in an interview on the 41 Democrat Congressmen and women on a tour of Israel in August;
“The sheer size of the current Democratic delegation – it includes 32 first time Congresspeople – sends a message that the Democratic Party is a “very strong proponent, supporter and protector of Israel.”
He mentioned as further evidence of this support that the anti-BDS measure passed the House by a vote of 398-17. Only 16 of 239 House Democrats voted against it.

The Congressional tour gave new members of Congress an overall education on Israel. This is a tour of the land that did include meetings in the West Bank with the Palestinian Authority so they could hear both sides of the issues.

Congresswomen Omar and Talib refused to go on the trip with the rest of the Democrat Congressional delegation. They were to leave on their journey to Israel on August 16th, 2019 and were, according to reports, only visiting with the Palestinian Authority and attending a pro-BDS, anti-Israel conference. The Israeli government announced on August 15th that they would not be given visas to enter the country.

What is the BDS movement?

The Boycott, Divest and Sanctions (BDS) movement was started by enemies of Israel that want to see an end to the Jewish state. They do not believe Israel should exist, at all.

Their movement is designed to propagate false propaganda against Israel in an attempt to get the world to turn against Israel, delegitimizing the Jewish state. The propaganda is eerily similar to Hilter’s tactics before the Holocaust. “Tell a big enough lie enough times, and the people will start to believe it,” was Hitler’s strategy. It is the strategy of the BDS campaign.

Comparing Israel to Nazis, saying they are an “Apartheid state,” killing Palestinians en mass for no reason, are just a few of the outlandish allegations of the BDS movement. The BDS campaign is directly responsible for the increase in anti-Semitism and attacks anyone who supports Israel.

The BDS propaganda has fooled European countries into labeling products and goods that come from Jewish farmers or companies in the West Bank so they can be easily boycotted. These boycotts not only hurt Israelis but cost thousands of Palestinians their jobs when the businesses close down or move.

Israel a large exporter of produce, dairy and food products to Europe. The BDS Boycott campaign is so crazy that if a cow is standing in the West Bank and owned by a Jewish farmer, the milk from that cow goes into a product, then it should be labeled as “occupied territory” and boycotted.

Left-leaning college campuses and even some church denominations have fallen for the false BDS propaganda. They have divested funds in their retirement programs from American companies, like Caterpillar, that do business with Israel.

For a clearer understanding of Divestment side of BDS, please see the Church4Israel article “Presbyterian Church USA Turns Against Israel.” In this I give three US companies the church divested from and how those companies provide security in Israel. Did the Church side with terrorists? You decide.

The propaganda against Israel has resulted in a constant barrage of resolutions and charges against Israel at the United Nations while the rocket attacks and terrorism upon Israel civilians are ignored. 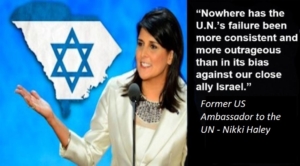 BDS is Against the Policy of the United States

As mentioned earlier, the U.S. Congress overwhelmingly passed a House Resolution that opposes the BDS movement – “including efforts to target United States companies that are engaged in commercial activities that are legal under United States law, and all efforts to delegitimize the State of Israel.”

The Trump Administration has taken a strong stand against the BDS movement by officially calling support of BDS to be anti-Semitism. The US State Department, in its official definition of anti-Semitism, recently added the line “Drawing comparisons of contemporary Israeli policy to that of the Nazis.” This is a direct reference to the tactics of the BDS campaign.

Despite this, and the overwhelming bipartisan support Israel has from both the House and Senate, these Congresswomen, Alexandria Ocasio-Cortez of New York, Ilhan Omar of Minnesota, Ayanna Pressley of Massachusetts and Rashida Tlaib of Michigan, also known as “The Squad” and “AOC plus three” all continue to support the BDS campaign and bash Israel. They have been called out over and over again for anti-Semitic remarks.

Congresswomen Omar has been given a position on the House Foreign Affairs Committee, a coveted committee assignment in which she receives top-secret security briefings on Israel and the Middle East. Why would Nancy Pelosi put someone that hates Israel in that position? It is counterproductive and highly offensive to our strategic partner Israel. An elected representative that is so anti-Israel and supports the enemies of Israel should not be on this committee.

Vice President Mike Pence made a passionate speech at AIPAC Policy Conference in March 2019 emphasizing that Rep. Omar should be removed for this committee.

On August 12, 2019, hundreds of New Yorkers gathered in Times Square to protest Rep. Omar’s seat on the Foreign Affairs committee.

Maybe now that Israel has refused her entry, the Democratic leadership will do the right thing and remove her from this committee assignment.

Israel is wise and has the right not to allow anyone, even an elected member of the U.S. Congress, to come into their nation to promote hatred against them. This is why Israel passed the no-entry law.

After I heard the Congresswomen announce they intended to go to Israel on their own, I was praying that the Lord would touch the Congresswomen. I prayed that as they had their feet in the Holy Land, that they would come to know the truth. But that was not likely as they were only meeting with the Palestinian Authority and attending a BDS conference.

If Representatives Omar and Talib had planned to get a true tour of the land and hear both sides of the issues, they likely would not have been banned from coming.

The author and founder of Church4israel, Robin Rowan, has been invited to attend the Christian Media Summit in Jerusalem. It is an honor to be recognized as a top journalist on Israel issues. She is requesting donations to assist with airfare and extra expenses. Would you consider a donation for this special trip? Thank you!

This article is copyright reserved Truth Publishing and Church4Israel. No part or in whole may be copied, reproduced or republished without permission of the author.