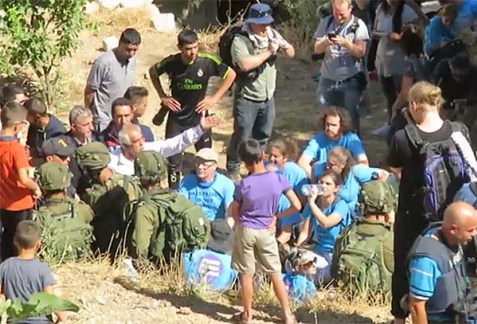 “I heard the same Arab complaining that they pulled out his grazing weed from the ground, that he owns a herd which he keeps in Dura village, and the old factory is one of the area where his goats graze.”

A group of anti-Israel Jewish activists arrived in Hebron to award the city its first movie theater. But in the process, according to local Jewish residents, they destroyed the grazing grounds of a local Arab shepherd.

According to a JTA report by Andrew Tobin, dozens of American Jews spent Friday in Hebron “practicing nonviolent resistance against Israel’s presence,” singing “The World is Built with Loving Kindness” in English and Hebrew, clearing scrap metal, weeds and debris from a dirt lot with several low-slung cement structures, singing Jewish and protest songs, and passing around bags of popcorn labeled “Cinema Hebron” below a “triumphant” sign that read “Cinema Hebron: Coming Soon.”

Indeed, the mission last Friday was to endow Hebron its “first Palestinian movie theater.” Eventually, soldiers and police officers demanded that the activists leave the area, and when said activists sat on the ground, locked arms and sang “Lo Yisa Goy el Goy Herev,” they were pulled up one by one and removed. The Israelis in the group were detained, the Americans were let go (which was their strategy).

Around 2 PM the American activists left the Israelis behind bars and proceeded to have a much deserved lunch.There are many things wrong with the above two paragraphs, and we encourage you to read the entire JTA report to better appreciate our story (Peter Beinart joins US Jews for civil rights-style protest in West Bank).

We spoke to Tzipi Shlisel, who is actually quoted by Tobin in his story, where he uses her as the obligatory reactionary settler’s counter-view:

“[The activists] think they’re doing a good thing, but they’re really helping the terrorists,” and, “I’ll tell you, in the Holocaust, Jewish people helped Hitler, too.”Tzipi Shlisel’s father, Shlomo Ra’anan HY”D, was stabbed to death by a local Arab back in 1998, the year when then Prime Minister Benjamin Netanyahu handed over most of Hebron to PA Chairman Yasser Arafat.

Shlisel recalls it was a scene similar to the devastating stabbing of 13-year-old Hallel Yaffa Ariel, in Kiryat Arba two weeks ago. But Tzipi Shlisel contacted JewishPress.com not because Tobin’s report treated her father’s murder with less empathy than it did the activists’ lunch, or Because Tobin used her as a necessary color stain on his canvas describing brave Jewish activists defying Israeli occupation with action and song.

Tzipi Shlisel insists Tobin’s report is partial, and that he missed out on a wealth of historic and cultural information, including the fact that the area the Jewish activists weeded so energetically was prized for its weed by a local Arab shepherd.The lands in question are in Tel Rumeida (biblical Hebron according to some authorities) which were purchased by the Hebron Jewish community 200 years ago, the first one in 1811, the second in 1816. During the 1949-67 Jordanian occupation, the Abu Aisha clan took over some of those lands.

The neighborhood of Admot Yishai was built on a small part of this land, which is otherwise known as the Tel Remeida settlement, over which the Arabs are fighting the Jewish community. “But we have aerial photographs of the entire area, including the ancient olive trees which were purchased along with the land, as is noted in the purchase documents, and these lands all belong to the Jewish community,” Shlisel insists.

Near the neighborhood there’s an area where the army built a bunker behind which there is a copper factory which was shut down for environmental reasons more than 30 years ago. “It generated crazy air pollution, Jews, Arabs, no one could breathe,” Shlisel recalls.“Eighteen years ago, after my father was stabbed to death by an Arab, the IDF created check points for the Arab traffic near our neighborhoods, and the area around the inactive copper factory is off limits to Arabs.

”Hebron is divided into the H1 and H2 zones. H2 compromises 80% of Hebron, and Jews are forbidden to go there. The Arabs, on the other hand, can move freely in much of H1.“

Now, when the activists arrived with their tremendous singing, they cleaned up the area thoroughly, it was truly amazing, but the local Arab, a member of the Abu Aisha clan, who’s been claiming that these are his lands, and even says they are registered as his with the city of Hebron, was not consulted.“Later, a police officer told me there was a military order (tzav aluf — lit. decree issued by a General) to evacuate the activists and that the Arab had filed a complaint with local police,” Shlisel said.JewishPress.com contacted the local Hebron police station chief who said there had been no complaint filed.

But a different source in the Hebron community who asked to remain anonymous told the JewishPress.com that the leftwing activists, one of whom was a former Tanzim activist from the Abu Aisha clan, convinced the Arab shepherd not to file a complaint. The fact is police and IDF soldiers did show up to remove the activists, and the Arab is seen asking police to chase away the American invaders.

“I heard the same Arab complaining that they pulled out his grazing weed from the ground, that he owns a herd which he keeps in Dura village, and the old factory is one of the area where his goats graze. Those peace activists did a cleanup job on his source of livelihood. They raked and tore up the weeds, and from a Western culture point of view they did a fantastic job, but from this Arab’s point of view they destroyed his grazing field,” Shlisel said.

As to the idea of “Cinema Hebron” (the name of the city in Arabic is Al-Khalil, meaning “friend,” after Abraham who was the friend of God, while Hebron is the colonialist-Zionist name used by the occupiers) Hebron is probably the most conservative religious Muslim city in all of Israel, where men and women are completely segregated, where Hamas rules, and where the very idea of attending a movie, never mind opening a movie theater, could get a man flogged.

That these American “liberators” would be so ignorant of the cultural and religious values of the people they have come to set free with song and hard weeding is possibly the funniest, even hallucinatory, idea of all.

“Which is why the only place where they could advocate having a movie theater in all of Hebron was near the Jewish neighborhoods, where at least no one would stone the living daylights out of them for their insolence, Tzippi Shlisel said, adding, “These human rights group who say they want to help the Arabs are actually ignorant of who these Arabs are. They step on their culture, trampling their values, with great glee and with a loud song on their lips.”