The new Congresswoman, Ilhan Omar, has done it again. Her Anti-Semitism is blatant. Her latest tweet insinuates Congress supports Israel because they had been “paid off” to support Israel. She claims AIPAC buys them. Want to know how wrong this is?

Well, friends, read below, and better yet, you can take action to stop the Democrat party from falling into anti-Israel rhetoric and views.

There is a danger with new Representatives if this is not addressed.

Nancy Pelosi, who has always been a strong supporter of Israel, made Representative Omar apologize. Well, sort of apologize.

Ms. Omar is under the influence of the anti-Israel, anti-Semitic far left false teachings that too many of our young people are exposed to in Universities today. She, like many of her fellow freshman in Congress, is inexperienced and without knowledge of the truth. Unfortunately, her influences are so ingrained; it will take much prayer and education to change her mind.

Speaker Pelosi should promptly remove Rep. Omar from the Foreign Relations Committee, a post that Nancy Pelosi originally gave her.  Congress can set standards for the new Representatives. Key positions should require knowledge of the subject matter.

Having an anti-Semitic Representative on Foreign Relations is like asking the UN to move into DC and influence Congress on Israel. A bad idea on so many levels!

All sides are speaking up against anti-Semitism

Even Chelsea Clinton attacked her for her comments on Twitter. Democrats and Republicans are coming at her for her insinuation that “Jews control government through money.” This is the type of anti-Semitism that David Duke (KKK) used to spew.

Truth – AIPAC does not give money to candidates. They do not support or oppose candidates. They are not a “PAC”. They are the American Israel Public Affairs Committee, an American lobbying organization focused on POLICY concerning Israel and the US-Israel relationship. They were named AIPAC before the term “PAC” was ever invented for campaign raising purposes.

AIPAC influences Congress via EDUCATION about the truth on the ground in Israel so that we, as advocates for Israel, can get security aid, missile defense, and other bills passed through Congress.

I have been actively involved with AIPAC since I returned from Iraq in 2009. This March will be my 10th year attending AIPAC’s Policy Conference. I have served, as one of the very few Christians, on AIPAC’s National Council for now 7 years. So, yes, I know a little about how they work! I wish more Christians would join me at Policy Conference, being an advocate for Israel. If you are interested, see below.

Action YOU can take. If your Congressman, or Congresswoman, is Democrat chances are they have been very supportive of Israel in the past. Israel support IS bi-partisan and over the years has been 100% supported by Democrats. We can’t let these radical comments and ideologies stand. Call your Representatives’ offices and ask them to publically denounce the comments of Rep. Omar and push Speaker Pelosi to remove her from Foreign relations, a coveted Committee. We need people with knowledge and experience on that committee.

You can find your representatives phone number at www.House.gov and enter your zip code. Let them know that YOU support Israel as their constituent, and it is important to you. They really do want to hear from you, no matter the party.

You could be in Washington speaking to your Representatives about Israel.

Would you like to know more of the “Truth on the ground” in Israel? Would you like a deeper knowledge of how you can have a voice for Israel and all the ways America helps Israel?

I understand and educate others with all the knowledge I gain by going to AIPAC’s Policy Conference every year. Prime Minister Netanyahu will speak at PC again this year. You could be there! 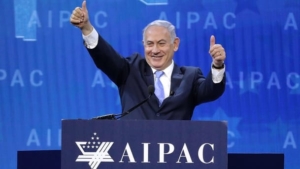 Over 18,000 advocates for Israel will come to DC to learn and be a voice. This year Policy Conference is March 24-26. You can come with me if you have a passion for Israel and want to know how to REALLY help America stand for Israel. For a very limited time, there are discounts available for Christian leadership. Contact me and get involved. Church4Israel at gmail.com.