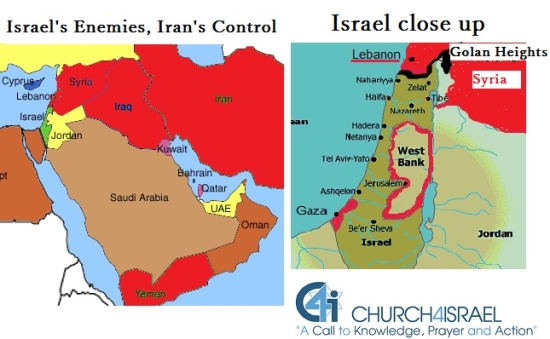 This attached video was made in 2012, and we are witnessing the prophecies of the Bible unfolding in an even greater measure today than when it was made. The rest of the story is detailed below.

Iran is literally modern day Persia, the same Persia from which Haman arose in the book of Esther, to destroy all the Jews “in a day”. Through fasting and prayer, Esther risked her life to go before the King to make her voice heard, and the Jewish people were saved.

Iraq is modern day Babylon. In 586 BCE, (the dates are reported differently between various scholars)  the King of Babylon, Nebuchadnezzar, destroyed Jerusalem.  On the 17th of Tammuz, following a 30 month siege, the city wall was breached. Three weeks later on the 9th of Av, the first Temple, Solomon’s Temple, was destroyed. Hundreds of thousands of Jews were killed and many more were carried captive into Babylon.

Then the modern day Babylonian King, Saddam Hussein, inscribed his name on the walls along side the original King Nebuchadnezzar, and was determined to carry out Haman’s original mission. Saddam’s nuclear reactor was named “Tammuz”, with the purpose of destroying the Jews in a day, just as Haman intended to do and Nebuchadnezzar after him. In 1981 Israel destroyed Iraq’s nuclear reactor. Saddam was later destroyed by the United States.

In 2012 it appeared that Iraq / Babylon was no longer an issue, but now, since the US troop withdrawal, Iran has taken control of Iraq.

With a convergence of ancient Persia and Babylon in modern times, the danger to Israel and the Jewish people is greater than ever before. The leadership of Iran has changed, Ahmadinejad is no longer the Iranian President, but the  mission has not changed. And that mission, originally set forth by Haman the Persian, and the original Babylonian King, and then carried on by Saddam Hussein, was and is to destroy Israel and the Jewish people.

In 2015 Iran/Persia has not only taken over political control of Iraq/Babylon, but also Lebanon, on Israel’s northern border. Lebanon is under Iran’s control though it’s proxy Hezbollah, a recognized terror organization responsible for multiple terrorist attacks against the United States. At present, Hezbollah is arming up for it’s future attack on Israel. Heavy Russian made military equipment and weapons have been smuggled to Hezbollah through Syria over the last two years under the cover of the Syrian “civil war”.

Iran has taken control of Syria with it’s partner Assad. These are the same Assyrians who destroyed the 10 tribes of Israel 135 years before the destruction of the first Temple. Syria shares a large border with Israel, separated only by a small “UN Demilitarized Zone.” Hezbollah commanders and an Iranian General were killed by an Israeli airstrike near the Syria-Israel border in early 2015.

This week another Middle East nation came into Iran’s control. Yemen fell to the radical Islamic group Houthis, who are funded and armed by Iran. The Iranian Quds Force trained and armed them. The Houthis official slogan sounds very familiar to that of Iran’s government:

“Death to America, death to Israel, damnation to the Jews.”

Iran is now the King of Persia, and Babylon and of the Assyrians. They are making an end run to control all of Israel’s borders and support Hamas terrorists on Israel’s western shore.

Iran has taken up the mantle of determination to destroy Israel and the Jews “in a day” with nuclear weapons. The Bible is once again repeating itself, and prophesies given long ago are coming to life in our day. Will the US stop it? Or will we allow this enemy to continue to rise out of ignorance?

Where is the Esther for our day? Who will rise up and stop this enemy?

The United States was born on the 17th of Tammuz, which fell on July 4th 1776. What is the significance? The 17th of Tammuz is the date on the Jewish calendar that the city walls were breached, leading to the destruction of both the first and second Temple. Many other travesties have happened to the Jewish people on this day. It is a day of morning.

For only the 9th time since 1776, this year July 4th, 2015 will once again fall on the 17th of Tammuz. The United States MUST rise up for Israel and the Jewish people, “for such a time as this!”

We MUST take a strong stand against Iran and their quest for a nuclear weapon. They must be held accountable for their spread of terrorism across the globe. They have infiltrated every corner of the earth, every country, with political propaganda against Israel, and terror cells supporting attacks against Jewish people. They must be stopped.

As Esther had to risk everything to stop Haman, Christians must step out now and have their voice heard, for the protection of Israel and the Jewish people.