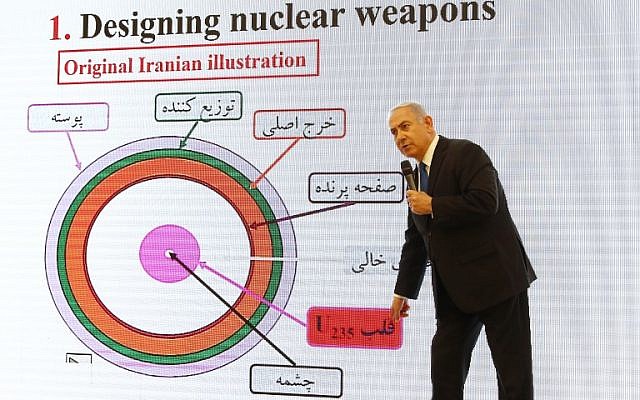 It’s not often that a head of state reveals secret intelligence they have captured from another country.
But that is exactly what Israel Prime Minister Netanyahu did. PM Netanyahu showed proof Iran lied about their nuclear program. It was stunning. Here is why it matters.

PM Netanyahu showed live, in prime time in Israel, on April 30th, copies of the archives of Iran’s entire nuclear research, plans and development. He showed the location where Israeli Intelligence captured the  100,000 documents, photos and video proof that Iran had all along lied to the world about the planning and development of nuclear weapons.

THE PROOF IS IN

Iran for years had a secret nuclear development program to design build nuclear weapons. It was hidden and lied about for years, including outright lying to the International Atomic Energy Agency (IAEA). The report issued by the IAEA was substantially used to legitimize the Iran nuclear deal. It was all based on lies.

Netanyahu revealed the proof that Iran was developing nuclear cores in a secret underground facility. Iran was building nuclear implosions systems and undertaking nuclear tests. Iran was integrating nuclear warheads to be mounted on ballistic missiles.

“The files conclusively prove that Iran was lying when they said they did not have a nuclear weapons program.”

After the Iran Nuclear Deal was signed, they changed the name of the nuclear program and used the same personnel. They put thousands of centrifuges to enrich uranium under a mountain at the Fordow weapons facility.

Iran was required by the IAEA to come clean about it’s nuclear program in the Iran Nuclear Deal.

The IAEA issued a report; “Nuclear Aspects of the Iran Nuclear Program.” Iran was given the opportunity, and required, to come clean. Instead Iran lied and denied any of these program existed. Netanyahu showed the world the proof that Iran was and has been all along developing a nuclear weapons program.

Prime Minister Netanyahu confirmed that the United States intelligence verified that the documents are real.

The Nuclear Deal was signed by the “P5 + 1,” which is the United States, China, France, United Kingdom and Russia plus Germany. The lead negotiator was John Kerry under the orders of President Obama, signed in 2015, under great opposition by Israel and the American people.

The Deal was all based on lies by Iran. Israel has proven it.

Throughout the formation of the deal, the United States and Iran disagreed on the actual meaning of the framework.

United States: “Iran’s adherence to the Additional Protocol of the IAEA is permanent, including its significant access and transparency obligations.” – State Department Fact Sheet

Iran: “Iran will implement the Additional Protocol on a voluntary and temporary basis for the sake of transparency and confidence building…” – Iranian Foreign Ministry Fact Sheet, translated by the Belfer Center for Science and International Affairs at Harvard University

Inspection of Military Sites – Yes or No?

United States: “If we see a site that we need to inspect on a military facility, we can get access to that site and inspect it.” – Deputy National Security Adviser Ben Rhodes, CNN Interview, April 6 2015

Iran: “Visiting military centers are among the red lines and no visit to these centers will be allowed,” – Iranian Brig. Gen. Hossein Dehghan, April 9, 2015″

After the Iran Nuclear Deal lifted years of sanctions on Iran, billions of dollars in Iranian assets that were previously frozen were released. With the lifting of the sanctions, the European nations scrambled eagerly to get large contracts in Iran. The access to Iran’s economy and the billions of dollars of now freed up  was the main motivator for the European nations to get the deal signed and sanctions lifted. Business was set up, contracts were signed, money flowed into Europe.

Unfortunately, Iran has used much of the released money to commit terrorism, to establish armies and commit genocide in Syria, terrorism in Yemen. Millions have been used to build an army and arsenal for Iran’s terror arm Hezbollah in Lebanon plotting a future attack against Israel.

Iran’s funding of terrorism, actions in Iraq and Syria, and the ballistic missile program were supposed to be addressed by the Iran Nuclear Deal. Most of those issues were dropped out of the Deal by John Kerry at the last minute of negotiations to get it signed.

Until Israel Prime Minister Netanyahu dropped his bombshell on April 30th in his live broadcast, those issues were the focus of the recertification of the Deal or any changes that may be made.

Now the world will have to figure out a way to solve the problem of billions of dollars released into the hands of the world’s largest state sponsor of terrorism.

CAN THE WORLD BE UNIFIED NOW?

The President of France and Germany met with President Trump just days before this unveiling of the secret documents. Since the U.S. Intelligence had verified the documents we can assume it was a hot topic of conversation between President Trump and other world leaders.

Earlier on April 30th during an appearance on Fox News’ “Outnumbered’ program, Senator Lindsey Graham broke the news that he would be reaching out to Democrats. He suggested sending a bipartisan letter to President Trump to suspend the re-certification for 90 days. This would give time for the Democrats in the Senate to come alongside the President and Republicans on a united front for changes to the Nuclear Deal. Democrat Senator Coons surprised Senator Gram in saying that he would be open to making changes.

A bipartisan united front from the United States Senate is needed to push changes in the deal with European signors.

The Democrats in the U.S. Senate that stood behind President Obama and voted for this terrible deal need now to do what is right. They need to admit it was a mistake and stand unified with President Trump to fix it.