On April 13th, 2018, President Trump announced the United States, Great Britain and France are bombing Syria. The capital of Damascus is reportedly under fire. This is the background needed to understand the larger strategic picture.

For many years I have been speaking about the human tragedy in Syria, as well as the dangerous buildup of Iranian arms, and army, on Israel’s borders. The church, and the American government, have been deathly silent to the atrocity of the genocide in Syria. No one wants to see the big picture. Now, as chemical attacks in Syria continue, Europe is under attack from within, Iran prepares for war with Israel, it is time to get to the truth.

Syria, the heartland of Christian history, has been destroyed by Syrian President Assad as he committed genocide of Christians, Sunni, Yazidis and others starting in 2011-2012. Hundreds of thousands of innocent people have been killed, millions displaced, by a government supported by our long time enemy Iran.

ISIS was a distraction in the larger crisis. The humanitarian disaster of Assad, Iran and now Russia wiping out masses of Syria’s population, the dismantling of European society by refugees, was bad enough. Israel, and the world, is now in the cross-hairs of war.

Humanitarian Disaster That Changed the Region

Since 2012, over 700,000 have been slaughtered. We have witnessed multiple chemical weapon (WMD) strikes and blanket bombing of towns. Millions of Syrians were forced to flee. Europe opened her borders. As a result, the face of Europe, once Christian democracies, are changed forever. 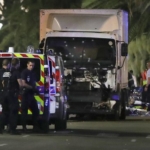 After the great flood of refugees into Europe, the Jews started fleeing France by the tens of thousands. They were no longer safe. First, the Charlie Hebdo terror attacks, then the horrific Paris nightclub shooting. July 2016 saw an Islamic terrorist ram a car through tourists killing 75 and wounding over 100 on Bastille day. A clash of cultures became an internal war on terrorism. France endured over two years of Marshal Law under a state of emergency as a result.

(For more on the attacks on Jews in France and the Jewish population fleeing, see our article “Terror Again Hits France, Did They See This Coming?“)
The media, who reported minimally on bombings of villages in Syria, started to pay attention when Europe felt the terror. London became less safe, reports of women routinely raped in Sweden as they walk alone, and European neighborhoods became unrecognizable as the culture shifted. It was the result of open borders to millions of Muslim refugees from Syria, and then with ISIS growing, from Iraq. France came under martial law for over two years not knowing when the next terror attack would come.

It all started when the world turned a blind eye to the genocide. The Jewish populations of Europe, all of Europe, have felt the results. Now Israel is threatened from multiple borders.

The BIG Picture. Iran is Using Syria for Military Build Up.

Syria and Iraq are a virtual ‘land bridge’ between Iran and Israel.

Iran has a long history of partnership in terrorism with Syria. Iran and Syria were found complicit in multiple terrorism attacks against the United States, and our armed forces abroad.

How quickly we forget history. The Beirut Embassy bombings, the Marine Barracks bombings, the Khobar Towers bombing in Saudi Arabia by Iran,  and many more.

Qassem Soleimani,  is the Iranian Revolutionary Guard Corps (IRGC) General that oversees Iran’s military activity in Lebanon, Syria and Iraq. He is the same General that was in charge of up to 30,000 insurgents in Iraq and credited for killing hundreds of U.S. soldiers in Iraq. It was widely reported that three years ago Israel had him in their crosshairs, close enough to execute this notorious terrorist now ruling in Syria, but the Obama administration tipped off Tehran during negotiation of the Iran Nuclear Deal.

General Soleimani threatened again in April 2018 to “wipe out” Israel. His control over the Iraqi military as Iran has taken political control and now his full armies placed throughout Syria have solidified the ‘land bridge’ to Israel and control of the region. The Sunni Muslim nations of the Middle East, including Saudi Arabia, Jordan, and the Gulf States are very concerned. 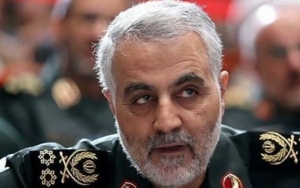 Syria – The Last Bridge From Iran to Israel’s Destruction

Syrian President Assad is of the Alawite Muslim sect, aligned closely with Iran’s Shia Muslims. The Syrian population is (was) primarily Sunni Muslim, with Christians, Yazidis, and others.

Sunni is a different sect of Islam than Iran’s Shia Muslims. It is a little complicated, but these two factions of Islam are at great odds of who is the true ruler of Islam. Iran believes they, the Shia, are destined to rule the world and bring in the final days.

Starting in 2011, Iran started helping Syria’s President Assad to commit genocide on the Sunni, Yazidis and Christians in Syria. This would assure Assad’s and Iran’s rule of the land territory and boost Iran’s claims of being the ruling Islamic leaders of the world.

The destruction of Israel is part of the bragging rights in their eyes.

It’s not about resources. Syria has only enough oil for internal consumption. They are not a large oil exporter, but are known for mining industrial metals. There is talk about oil at the Golan Heights. It’s not about oil. It is about Iran ruling the land of Iraq and Syria. It is Iran’s long-term mandate to destroy Israel and dominate as the leading power of Islam. It is their ‘final solution.’

Iran has purchased massive heavy weapons from Russia under the guise of the Syrian war. Russia was involved at first as only the weapons supplier, Iran her biggest customer. However, in the last few years Russia brought in aircraft to make strikes, assisting Assad in not just defeating rebel forces, but actually assisting in the genocide by bombing entire towns.

The significant piece of the puzzle that is missed by the media is how Iran has all along been purchasing major weapons systems from Russia, shipping them to Hezbollah in Lebanon on Israel’s northern border.

Airbase and Weapons Are Mounting at Israel’s Borders 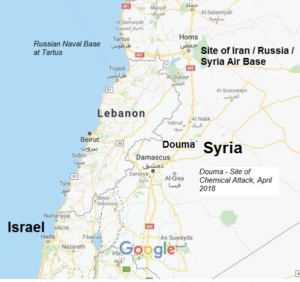 Russian has used Syrian port, Tartus, to stockpile Iran with massive weapons, transported via Homs, Syria to Hezbollah in Lebanon

Homs Syria has been a battlefield for years. The rebels fighting Assad have been able to maintain positions there. Homs is very strategic. It is geographically positioned perfectly between the Russian naval base in Tartus on Syria’s coast and the path to Lebanon, where Iran’s terror arm, Hezbollah, is mounting weapons for the future attack on Israel. Many battles have been fought for control over Homs the last six years. Homs will be in the news more in the coming days as the area has been the point of base and weapon manufacturing building by Iran and Russia.

Hezbollah was previously a medium size terrorist arm of Iran based in Lebanon, on Israel’s northern border. The war in Syria has allowed Iran to build Hezbollah into a massive army with well trained battalions of thousands of soldiers in Syria. Iran now has an airbase near Homs that facilitates airstrikes onto rebel held cities by the Syrian and Russian air force. WIth lack of U.S. involvement, Russia entered Syria without reservation in 2015.

The Russian made S-300 surface to air missile being deployed in Syria. In the hands of Hezbollah, is a great concern to Israel

Israel has conducted multiple airstrikes in Syria on the weapons convoys headed to Lebanon. In 2017, Netanyahu met with Putin and shared intelligence that weapons to Hezbollah had come to a breaking point and will not be tolerated. This resulted in Russia cancelling some anti-aircraft missile sales to Iran.

After an Iranian drone entered Israel airspace in February 2018, Israel launched an attack on the airbase near Homs. Israel conducted a second attack against the airbase on April 9, 2018 after a chemical weapon bombing on the city of Douma. Iran reported that four Iranian military advisors were killed. Syria accused the UNited States of issuing the strike but it was quickly denied by the Pentagon. Israel did not deny it, but did not publically take credit for it either.

Iranian IRGC forces, and battalions of newly trained Hezbollah forces are in Syria, a stone’s throw from Israel’s border at Lebanon and the Golan Heights. Israel has to be ready for the Iranian army in Syria to the west and also in Lebanon to the north. This while Iran continues to test ballistic missiles.

Russia wants its power back, and to reduce US influence. Iran wants to rule of the Middle East and to be the Muslim power that finally destroyed the Jewish people and the Jewish state.

Please Support This Work. All Donations of $10 or more will receive as a gift a “Celebrate Jerusalem 2018” magnet