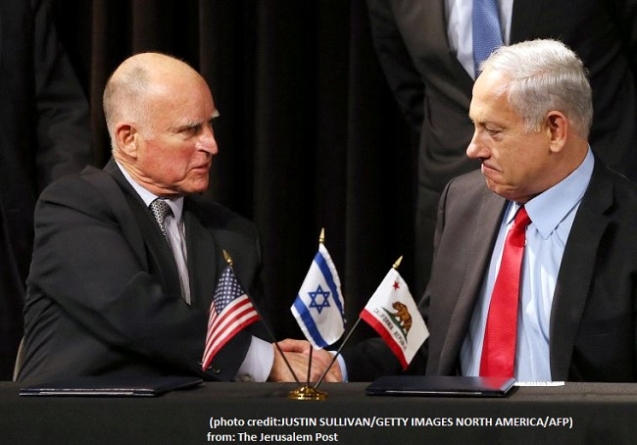 On Saturday afternoon, September 25th, the governor of California signed in to law a bill to stop the anti-Semitic BDS movement.

The bill, Assembly Bill 2844, only had two objectors in the entire California legislature, one in the House and one in the Senate.

The new law, called the “Anti-BDS Act” says what Alabama and 11 other States have said; in effect –

If you engage in discrimination against any sovereign State, including Israel, you will not do business with the State of California.

This is stunning achievement as California State Universities have been featured in documentaries with massive, and successful, radical protests – “Israel Apartheid Day” rallies that fly banners calling Jews “Nazis,” accusing Israel of Apartheid measures against Palestinians and other terrible anti-Semitic propaganda pushed by Muslim groups backed by Hamas and Islamists.

Several campuses of the University of California have voted to divest funds form companies doing business in the West Bank territory of Israel.

The first California University to divest funds from companies doing business in Israel was San Jose State University. In November 2015 the student government voted unanimously to divest from four companies that they say “play an active role in human rights violations committed by the Israeli government.”

These companies include Caterpillar, Motorola, Hewlett Packard, and GS4, a security company. These same companies have been the subject of divestment measures by several Universities and Christian church denominations. Why have these companies been targeted?

Read details about Caterpillar employing Palestinians and how Motorola and Hewlett Packard are providing security to Jewish citizens from terror attacks – on Church4Israel.

Here is the truth and the objections. The Palestinian Authority, the ruling governing body of the Arabs residing in ancient Judea and Samaria area of Israel, known as the West Bank, encourages the Palestinians to commit terror attack against Jews. If a member of the family will attack or kill a Jewish Civilian in the area, the family is financially rewarded, proving for them a yearly income. This has been denounced internationally but no one can stop it. To offset this encouragement for terror, Israel decided to “bulldoze” the home of any caught terrorists.

The anti-BDS, anti-Israel extremists say that Israel is bulldozing the homes of innocent Palestinians and they are using Caterpillar bulldozer to commit “human rights violations.” They do not talk about the hundreds of daily terror attacks committed by Palestinians on the Jewish people. Nor do they mention that Caterpillar’s equipment is used to build roads in the West Bank used by both Arabs and Jews and that the Palestinians are employed by Caterpillar in high paying jobs to run equipment.

The other three companies are all security related, helping protect the Jewish people form the terror attacks. Motorola provides the security cameras hidden in the trees in the West Bank so that they do not have to build walls or extreme fencing between the Jewish and Arab neighborhoods in the West Bank. The Motorola camera system stopped a terror attack in Efrat, a Jewish neighborhood south of Jerusalem, just weeks before this bill was signed.

You can read about the thwarting of the Efrat terror attack here.

Hewlett Packard supplies a biometric access control system used for work permits for Palestinians that have to travel into Israel. This has been used to stop the bus bombings by Palestinian terrorists from Gaza. G4S, the fourth company, provides security to Jewish businesses in the West Bank and supplies luggage scanners at various checkpoints to check for bombs.

Divesting and attempting to cause economic harm to these companies is actually supporting terrorism in Israel. The legislators in Sacramento have seen the terrorist propaganda for what it is and know what a great friend and trading partner they have in Israel. Israel’s water technologies may just be what saves California from their incredible drought.

The bill includes the statements:

“The exercise of one’s First Amendment rights is not a justification for engaging in acts of unlawful discrimination.”

“It is the intent of the Legislature to ensure that taxpayer funds are not used to do business with or otherwise support any state or private entity that engages in discriminatory actions against individuals under the pretext of exercising First Amendment rights. This includes, but is not limited to, discriminatory actions taken against individuals of the Jewish faith under the pretext of a constitutionally protected boycott or protest of the State of Israel”

“It is the intent of the Legislature to ensure that taxpayer funds are not used to do business with or support discriminatory actions against any individuals.”

The Bill requires, similar to the Alabama bill passed earlier this year, which any contract over a certain amount will have to be certified under penalty of perjury that they company or agency is not involved in boycotting or any discriminatory act.

It will be interesting to see how the leftist professors that encourage this rhetoric and the student unions on California campuses react to this new law. How will California enforce it and get the Universities that have already put in divestiture measures in place be corrected?