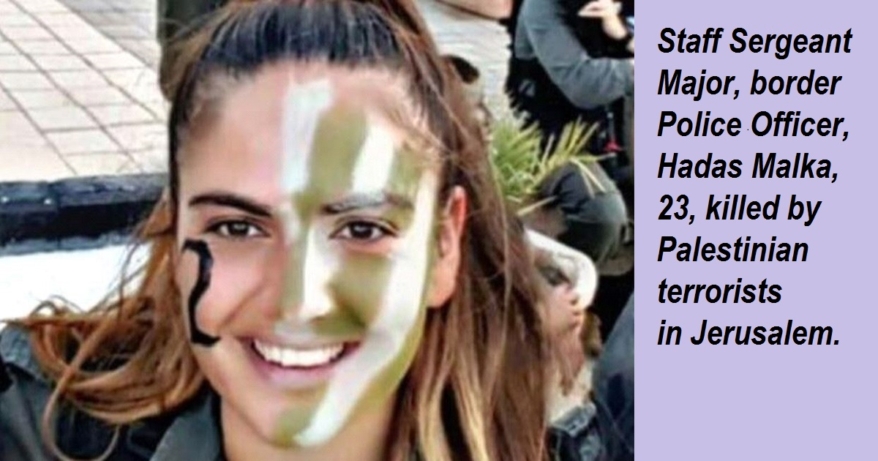 ISIS and Hamas Compete for Credit for Terror Attack in Jerusalem

Three young Palestinian terrorists from the “West Bank” coordinated attacks in Jerusalem. A young woman, IDF guard, was killed and others injured.

The terror attack was coordinated in multiple places in Jerusalem by three 18 and 19 year old Palestinians that all had history of terrorist activities. They were killed by guards attempting to stop the attacks. Knives and a homemade automatic weapon were used. Fortunately the gun jammed, lessening the death toll. The wound sustained by the knife attack killed a beautiful 23 year old Policewoman.

Gaza-based terrorist organization Hamas praised the bloodshed but disputed the claim that ISIS was responsible, stating that the perpetrators were affiliated to the Popular Front for the Liberation of Palestine.

The young terrorists resided in an Arab town near Ramallah in Judea/Samaria area of Israel known as the West Bank. The IDF blocked off the area after the attack to prevent further violence.

The Jerusalem Post reported Mahmoud Abbas’ Fatah party, the leader of the Palestinian Authority (P.A.) that governs the Arabs in the area, called the death of the three perpetrators a “war crime by the Israeli occupation forces” in a statement published by Fatah spokesperson Osama Al-Qawasmi.

Just a week before U.S. Secretary of State Tillerson announced that the P.A. leader Abbas had stated that the P.A. would no longer support the terrorist activities by funding the families of terrorists when they are killed or imprisoned.

This attack and Abbas’ words following it discredit what he wants the world to see as the normalization of relationships of the Palestinians with Israel. Will we next see the United Nations condemn the killing of the young terrorists?

The politicians in DC want to believe the situation is getting better, but no one can instantly change the decade’s old culture of hate that has trained Palestinian children, embedded in them, that their life goal is to be the killer of Jews. How do you change a culture in a day? How do you “un-train” an entire generation to not hate and dream of killing?

This is beyond the politicians. Only God can step in and change hearts and minds of Arabs in Israel under the Palestinian propaganda of terrorism.

Please support our work of education and reporting.