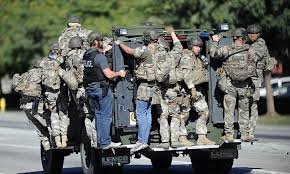 In Israel, they deal with threats of terrorism, and acts of terrorism, every day. They know from whence the threat comes, and they watch, and act, accordingly. The United States is now in the midst of similar attacks within her borders.

Has American political correctness by the political Left, and fear of government by the Right, put us in more danger?

Armed gunmen attacked a County Social Services facility in Southern California on the morning of December 2nd, 2015, leaving 14 dead and over 20 injured. The terrorists were a married couple. The husband was US citizen and 5-year health inspector for the county. The wife was brought from Saudi Arabia on a fiancée Visa after they were married in Saudi Arabia, but it appears she was on a Pakistani passport. They had a 6-month-old daughter. After dropping his daughter off at the Grandparents home, he came to the County Services Christmas party, left, and came back with his wife.  Both dressed in full battle gear with AK47s, pistols, and pipe bombs, the two of them went on a shooting rampage. After killing as many as they could, they left pipe bombs behind for the police. The fire sprinklers were activated during the attack causing flooding of the facility, and with the bombs present, the crime scene was difficult to maneuver. Bodies of the victims were not removed until the following morning, and at the time of this writing, the victims’ identities have not been released. The terrorists were later killed in a shootout with police. In first reports, the FBI states the couple was not on any watch list.  The husband and wife team were too well-armed for the attack not to have been well planned and it is suspected that there were more targets in their plans. It was later found that the wife had plead allegiance to ISIS and possibly radicalized the husband. The FBI has publically called it a terrorist attack.

The Costly Fear of Profiling

A neighbor had seen unusual activity. The Arab husband and wife across the street suddenly were taking many deliveries and working in the garage until late hours every night. The neighbor didn’t call authorities because she was afraid of being labeled for racial profiling. After the terror attack that killed 14 innocent people, Police searched the same home that belonged to the couple committing the terrorist act finding multiple IED (Improvised Explosive Devices) constructed in the garage, some even on remote controlled cars. “IED Factory” one officer called it.

Are political correctness and fear of being called “Islamaphobic” going to cost us even more attacks in the future?

The Blaze reported a man who reportedly worked near the home of the San Bernardino mass shooting suspects grew suspicious when he noticed half a dozen Middle Eastern men hanging around the area of the home and garage. He did not report it because he did not want to appear racist.

The American public needs to realize we are at war. It is a different war than we have ever been engaged in as it has no boundaries. They must realize that there is a hidden enemy, and we cannot be concerned about what someone will think if we call out suspicious behavior. We must act wisely, and proactively, with the knowledge of this enemy that unfortunately we will always have to deal with. It is the world in which we now live.

A Dangerous Loss of Tools for Law Enforcement

Just days before this horrific terrorist attack in southern California, a key Intelligence program was stopped, shutting down the collection of metadata, records of American’s phone calls by the National Security Administration.  It was originated as part of the Patriot Act after the 9/11 terror attacks. If still intact today, it would allow the National Security Administration (NSA) to pull the phone records of the California terrorists and know immediately who the couple had been talking to, from where, and how long. Congress passed an act to halt the program because of fear of government overreaching into privacy, and the halt of the program took effect just days before the California massacre.

The original data collection program by the National Security Administration was of dates and duration of phone calls and logs of call times, but not content. The NSA never had the ability to listen to the content of phone calls within the program, which was part of the false rhetoric that eventually took this important tool away.

The metadata collection program would have been a great tool to help this investigation with immediate access to phone records, but now the authorities will have to get a court order for the terrorists’ phone records, go to the phone company with the order, and wait for the phone companies to give Police the records. This is a complicated and time-consuming process that will undoubtedly prove costly in our fight against terrorism, from abroad or at home.

In May 2015 President Obama signed an Executive Order prohibiting the federal government from providing certain military style equipment to local police departments. It bans armored vehicles, grenade launchers, high-caliber weapons and ammunition from being given to Sheriff Departments and local police. According to a report by the Daily Caller, for over 20 years, under the federal government’s 10-33 program, the Defense Department distributed military surplus equipment and vehicles to local law enforcement. Armored vehicles were kept in remote locations where they could not be seen by the public to avert fears, but was available for use in rough terrain or special circumstances of armed battles.

President Obama said upon signing the order, “We’ve seen how militarized gear can sometimes give people the feeling like there’s an occupying force — as opposed to a force that’s part of the community that’s protecting them and serving them,” He added that the equipment “can alienate and intimidate residents and make them feel scared.”

In mid-November, 2015, armored vehicles were confiscated from an Alabama Sheriff’s department. The vehicle had been used to safely removed victims from shooting area by a mentally ill person firing on Police, and was considered important for rough terrain area rescues. The tracked armored vehicles were used during the 2011 shooting of Anniston police officer and law enforcement found the shooter in a wooded area.

Sheriffs nationwide were outraged at the loss of this important equipment. The armored vehicles have treads not wheels and can be critical for rescues in deep snow, deep sand, in desert areas, and rough terrain. The treads make them appear militaristic.

“Without this equipment, people will die in the future,” the Volusia County, Florida Sheriff’s office wrote on its Facebook page. “It’s that simple. Lives will be lost unnecessarily. Let’s not take away needed tools from our law enforcement officers who risk their lives every day to protect the public. Let’s not make their jobs any harder or any more dangerous. And let’s not hamstring law enforcement officers in their ability to effectively respond to emergencies, neutralize threats and protect the public and themselves!”

The order to confiscate the equipment nationally from Sheriff’s department was a result of the citizen protest against police at Ferguson, Missouri, and Baltimore. However the military-looking equipment has also been a hot subject of many right wing blogs and anti-government commentators building fear in the citizens of what the government “might be up to.”

How will the FBI, anti-terrorist task forces, and local Sheriffs and Police departments fight this growing homeland terror threat with their tools being taken away, intelligence tools as well as equipment? Politics matter, and the “fear of government” rhetoric will prove costly in our fight against terrorism.

Our Police, and, yes, the Government agencies, are trying to protect US citizens, not coming after them, as many internet blogs would have you believe. Law Enforcement needs our support and prayers. Most importantly, they need to keep the important intelligence tools, and protective weapons and equipment, which are unfortunately being taken away from them.

The enemy is aware of the anti-government rhetoric, fear, and political correctness that American citizens have been inundated with. Rest assured, the terrorists will take full advantage of it.